BRAMS is based on the Regional Atmospheric Modeling System (RAMS) originally developed at CSU/USA. BRAMS software is under a free license (CC-GPL). Currently, it is developed and maintained by CPTEC/INPE, USP and others institutions in Brazil and abroad. BRAMS/RAMS are multipurpose numerical weather prediction models that were designed to simulate atmospheric circulations spanning from hemispheric scales down to large eddy simulations (LES) of the planetary boundary layer. Several new functionalities and modifications were included to improve the numerical representation of key physical processes over tropical and subtropical regions (Freitas et al., 2005, 2009), a complete in-line module for atmospheric chemistry and aerosol processes (Longo et al., 2013), as well as a state-of-the-art model for simulation of atmosphere-surface exchange of water, energy, momentum, carbon and others biogeochemical tracers (Moreira et al., 2013).

Besides, BRAMS includes the following features: 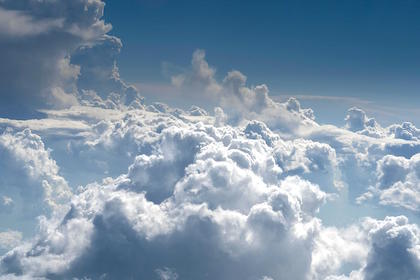 BRAMS solves the compressible non-hydrostatic equations described by Tripoli and Cotton (1982) and is equipped with a multiple-grid nesting scheme which allows the model equations to be solved on any number of  computational meshes of increasing spatial resolution using an one-way downscalling approach. It has a set of physical parameterizations appropriate for simulating processes such as surface–air exchanges, turbulence, convection, radiation and cloud microphysics. 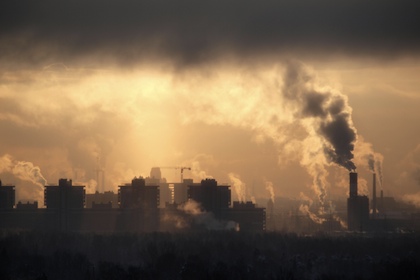 CCATT (Longo et al., 2013) is a Eulerian transport model coupled online with BRAMS and developed to simulate the transport, dispersion, chemical transformation and removal processes associated with gases and aerosols. CCATT models the tracer transport online with the simulation of the atmospheric state by BRAMS, using the same dynamical and physical parameterizations. The tracer mass mixing ratio, which is a prognostic variable, includes the effects of sub-grid-scale turbulence in the planetary boundary layer and convective transport by shallow and deep moist convection, in addition to grid-scale advective transport. The model also includes gaseous/aqueous chemistry, photochemistry, scavenging and dry deposition. The CCATT-BRAMS model takes advantage of BRAMS-specific development for the tropics/subtropics as well as the recent availability of preprocessing tools for chemical mechanisms and fast codes for photolysis rates. This on-line coupling of meteorology and chemistry allows the system to be used for simultaneous weather and chemical composition forecasts as well as potential feedback between the two. The entire system is made of three pre-processing software tools for user-defined chemical mechanisms, aerosol and trace gas emissions fields and the interpolation of initial and boundary conditions for meteorology and chemistry.

Besides this tool, BRAMS also contains the TEB-SPM (Town Energy Budget – Simple Photochemical Module) scheme, which was designed to simulate urban areas and its interaction with meteorology and air pollution and implemented by the University of São Paulo (Freitas et al., 2007, Freitas et al., 2005). 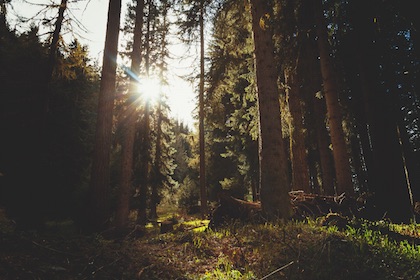 Integration with the Joint UK Land Environment Simulator (JULES) resulted in a new system that represents the state of the art in regional atmospheric modeling, including fully coupled chemical processes, aerosols and biogeochemical cycles (Moreira et al., 2013). This development provided a significant gain in accuracy in comparison to the LEAF (version 3) surface model originally employed by BRAMS. In addition, the new system significantly increases the ability to simulate processes involving air–surface interactions, due to the JULES’ ability to simulate photosynthesis, respiration and dynamic vegetation, among other processes. 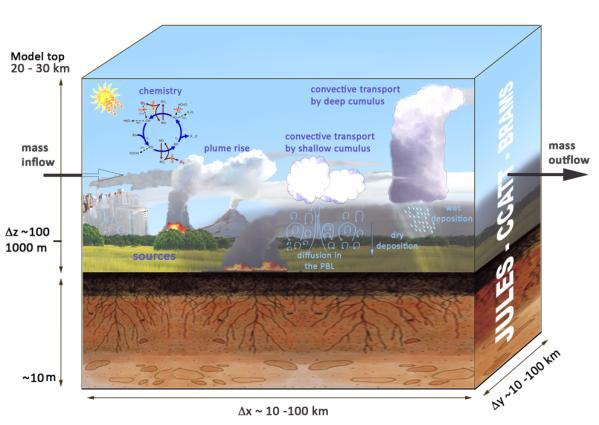 Interactions between the components (land – atmosphere – chemical composition) of BRAMS

For each of BRAMS’ time step, the atmospheric component provides to JULES the current near-surface wind speed, air temperature, pressure, condensed water and downward radiation fluxes, as well as water vapor and trace gas (for example, carbon dioxide and monoxide, methane and volatile organic compounds) mixing ratios. After its processing, JULES advances its state variables over the time step and feeds back to the atmospheric component the sensible and latent heat and momentum surface fluxes, upward short-wave and long-wave radiation fluxes, as well as a set of trace gas fluxes.The chemical component performs non biogenic emissions, deposition, transport, chemical reactivity and aerosol processes, including feedbacks to the meteorology, closing the cycle. The image depicts some of the sub-grid scale processes simulated by the three components in the unified (CCATT+JULES) BRAMS model.

The development team takes a modular approach to code design, allowing users to write and plug in additional modules if necessary.

BRAMS is open source and available under the GNU General Public License.

The BRAMS project was originally developed by ATMET/USA, IME/USP, IAG/USP, and CPTEC/INPE, with funding from the Brazilian agency Financiadora de Estudos e Projetos  (FINEP). Development of the CCATT-BRAMS, which forms the basis of the current model system, was initiated at the Physics Institute of the University of São Paulo, under the supervision of Professors Maria A. S. Dias and Pedro L. S. Dias. Further improvements were carried out at the NASA Ames Research Center/USA, the University of Orleans/France and the National Oceanic and Atmospheric Administration/USA. Currently, the project is developed and maintained by a team at the Center for Weather Forecasting and Climate Studies of the Brazilian National Institute for Space Research (CPTEC/INPE) in collaboration with several institutions in Brazil and abroad. 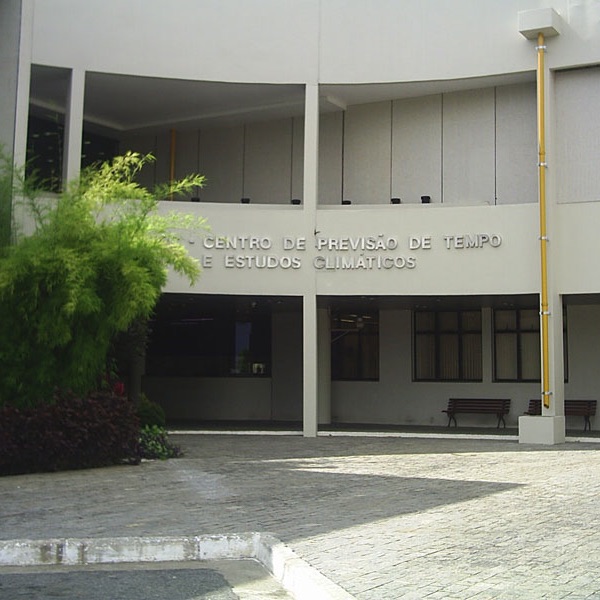 BRAMS is one of the models used by CPTEC (Center for Weather Forecasting and Climate Studies) on an operational basis. An older version, CCATT-BRAMS, has been used since 2003 for air quality forecasts in a domain that encompasses the entire South America with a spatial resolution of 25 km. Predictions of gases and aerosols are available in real time at meioambiente.cptec.inpe.br. Starting in 2013, BRAMS 5 has been running operationally on the center’s Tupã supercomputer, using 9600 cores to process regional weather forecasts on a 5km resolution grid that covers the entire South America. The links for the operational forecasts are:

Some details about the BRAMS 5 km operation: